Tillinghast Manor is now listed on the New York State and National Register of Historic Places as “The Jones House”.

The house was built by George W. Jones and his wife Hannah.  George was the oldest of Theodosia and Edmund Jones’ five children born in Romulus on October 14, 1830.  He learned to be a shoemaker at the Ovid Common School and worked at that profession until he was 22.  Jones moved to Philadelphia where he was employed as a flour, feed, and grain merchant.  He returned to Ovid in 1860 and purchased the Banker farm on the outskirts of Ovid. He worked hard and was able to acquire the Ovid Steam Mill from James Ferguson.  The Steam Mill and several buildings burned in the fire of September 17, 1865.  He was able to rebuild and reopened the grist, flour, shingle, and plane mill in 1867. His brother William joined him in the business in 1871.

An advertisement in the March 1874 Ovid Bee stated “Custom milling in all its branches done promptly.  We grind for 1/10 and No Less. The best family flour, corn meal and buck wheat flour.  Sawing, Ripping, matching, shingle sawing done on short notice.”

Mr. Jones was a Delegate to the Republican National Convention from the 25th District of New York, 1872. The Academy of Music, on Broad and Spruce Streets in Philadelphia was the site of the convention. The 752 delegates unanimously re-elected incumbent President Ulysses S. Grant along with Massachusetts Senator Henry Wilson as vice-president replacing Schuyler Colfax, who had opposed handling of the Reconstruction period after the Civil War. He was one of 35 Electors of the Electoral College for New York State in the 1876 presidential election.

It is believed that Theodore Roosevelt, a young man of 26, who was the assemblyman from the 21st District of NY and Chairman of Affairs of Cities came to Ovid to encourage Mr. Jones to run for office to secure a Republican Majority in the Assembly. A Republican, Mr. Jones ran and was elected in November of 1883 by a landslide, 600 votes ahead of his opponent. Mr. Jones was one of the 128 members of the New York State assembly from Seneca County.  Seneca County was part of the 26th District which included Cayuga, Tompkins, and Tioga Counties. The Republican Party regained control of the assembly 72 – 56. A well-known story is that when they both were in the assembly, Jones and Roosevelt rode the train from Albany to Ovid and “Teddy” stayed overnight in the Jones home. The 107th New York State Legislature met from January 1 to May 16, 1884, during the second year of Grover Cleveland’s governorship in Albany.

The New York State Legislature, by an Act passed on April 30, 1864, authorized Dr. Sylvester D. Willard of Albany, Secretary of the State Medical Society to investigate the condition of the insane.  His work led to the conversion of the New York State Agricultural College in Ovid to an Asylum.  A Board of Trustees was commissioned to organize and direct the affairs of the Asylum.  The terms were eight years and were appointed by the Governor and State Senate.  George W. Jones, Esq was a trustee of Willard Asylum as documented in annual reports of 1873 -1886.  In 1885, his duties included serving on the Committee on Farms & Buildings and the Auditing committee.

At a Board of Trustee meeting at the Willard Asylum on November 26, 1886, shortly following his death, Honorable George W. Jones was recorded as “A self-made and self-reliant man.  He was social, generous, sympathetic in nature and closely identified himself with the community.  He actively promoted the business interests of Ovid. By his efforts and means, he aided every enterprise that promised to be useful.  For 13 years, he has been a member of this board.  His practical knowledge, sound judgement, punctual attendance, and constant devotion to its interests, made him one of its most useful trustees.  He knew no stand of honesty or fidelity in private life that he did not equally regard in public station. We highly respected and esteemed him living and seriously mourn his death.”

Mr. Jones was a major employer in Ovid. In the February 7, 1872, edition of the Ovid Bee, it was announced that George Jones had won a bid to provide all the trestles for the Pennsylvania & Sodus Bay railroad between Seneca Falls and Trumansburg, NY.  An Additional contract with the Geneva – Ithaca railroad followed. The trestles were also incorporated in the building of his mansion.  The trestles can be found in the basement as support structures. A stand of timber in Hector was purchased to accommodate the contracts from the railroads.  This required fifteen to twenty teams constantly at work drawing the logs from the woods to the mill.  In the fall of 1875, a substantial foundation was placed under the sawmill and in May 1878 a new steam boiler was placed in the engine room.  September 15, 1882, the Hayts Corners railroad was chartered to run from the Hayts Corners Station of the Geneva, Ithaca & Sayre Railroad to Ovid.  George Jones was the leader of the efforts to bring the Lehigh Valley system to Ovid and on to Willard State Hospital.  Under his guidance as a trustee, some trackage was built on the hospital grounds.  The coal used for the hospital until 1877 – 78 had been brought by steamboats or barges on Seneca Lake.  He was an Officer of the Hayt’s Corners Railroad.

Mr. Jones was the Treasurer of Ovid Village from 1869 until his death and a member of the Board of Trustees for the Presbyterian Church.

He married Hannah Banker on August 2nd, 1852. She was born on March 14, 1831 and lived to be 82 years old. Unfortunately, she passed away before she could enjoy the privilege of voting in the 1918 elections.  At 17, she was aware of the activities in Seneca Falls and the Declaration of Sentiments. Unfortunately, George and Hannah were childless.  So, they adopted a young woman named Elizabeth. In George W. Jones last will and testament, he bequeathed to Elizabeth H Thomas his adopted daughter all his properties if Hannah had not survived.  Elizabeth is lost to history and no records can be found about her.  Upon her husband’s death, Hannah handled her affairs and executed many real-estate contracts selling her various holding for thousands of dollars. This was unusual at the time when women were not allowed to vote or control finances. You can walk from the Manor to where they are both buried in the Protestant section of the historic Ovid Union cemetery with the Banker family. 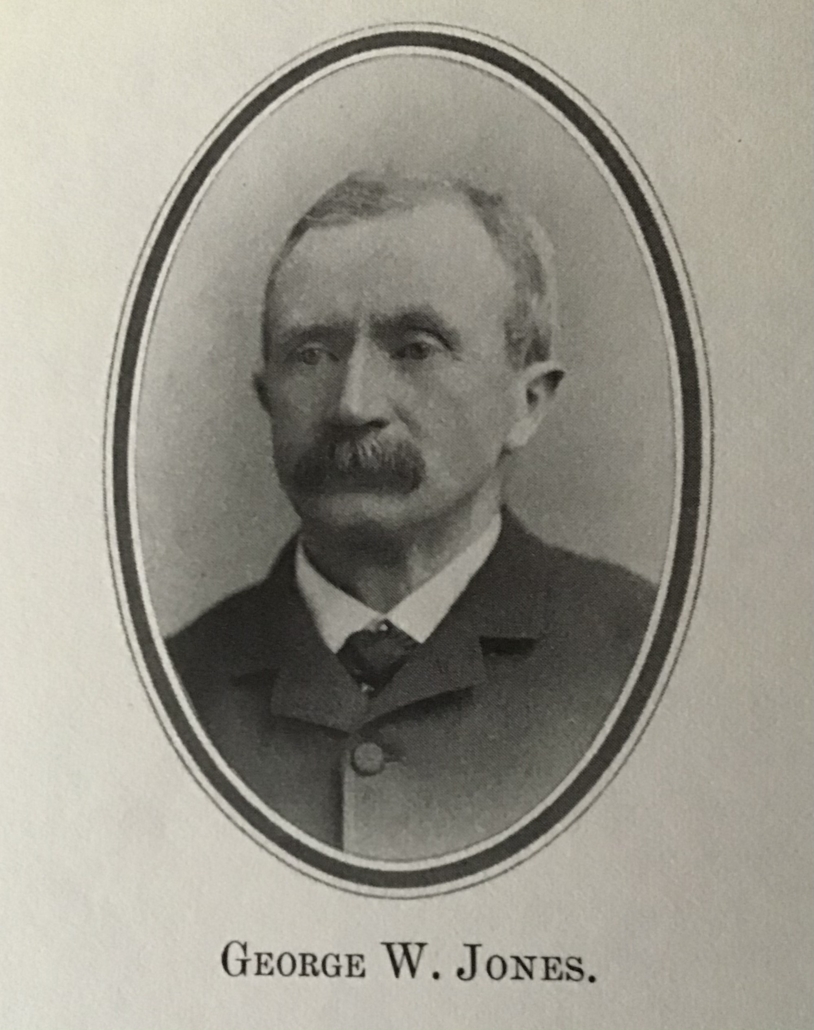 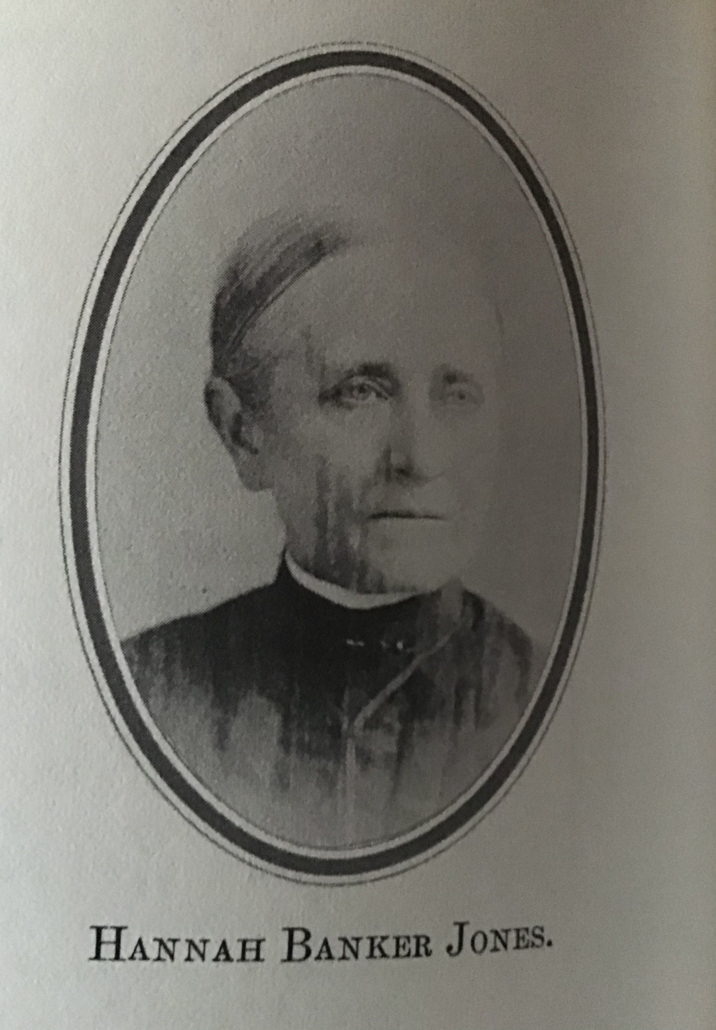 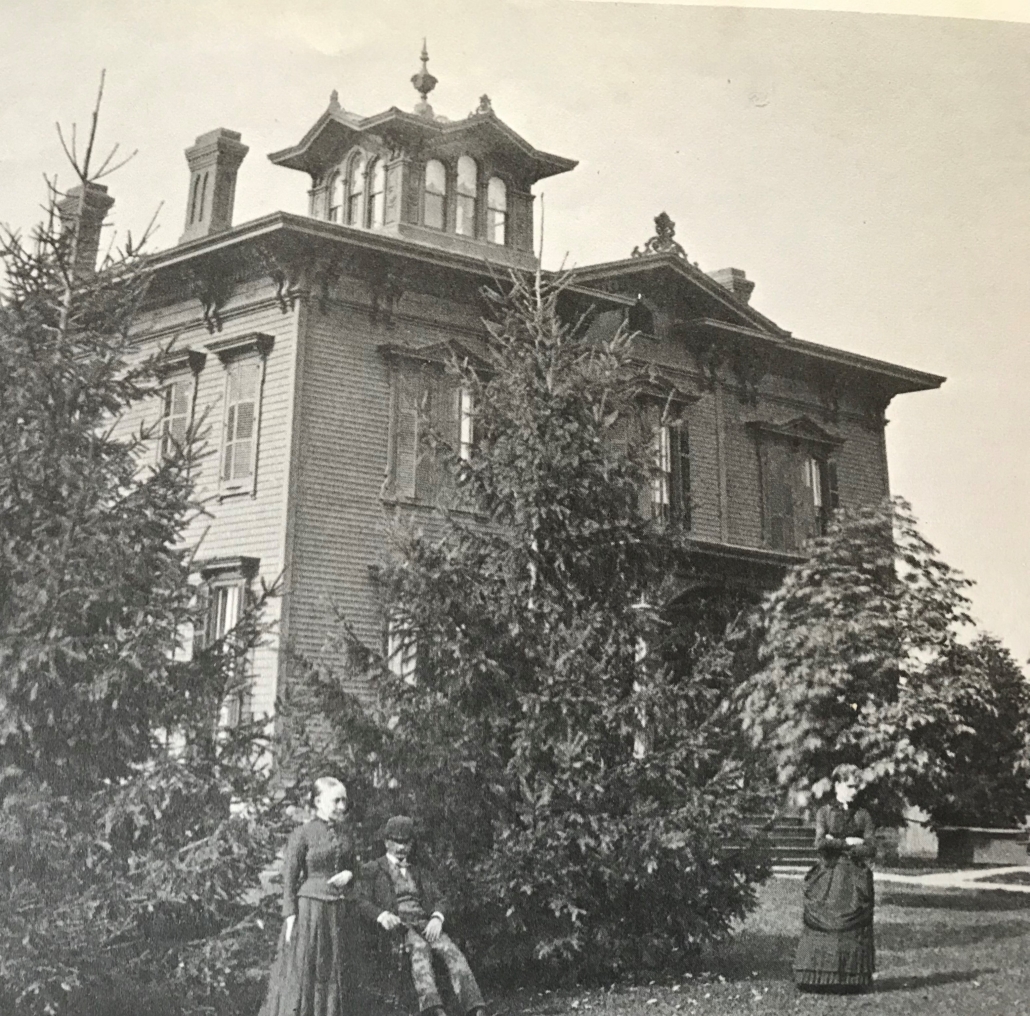 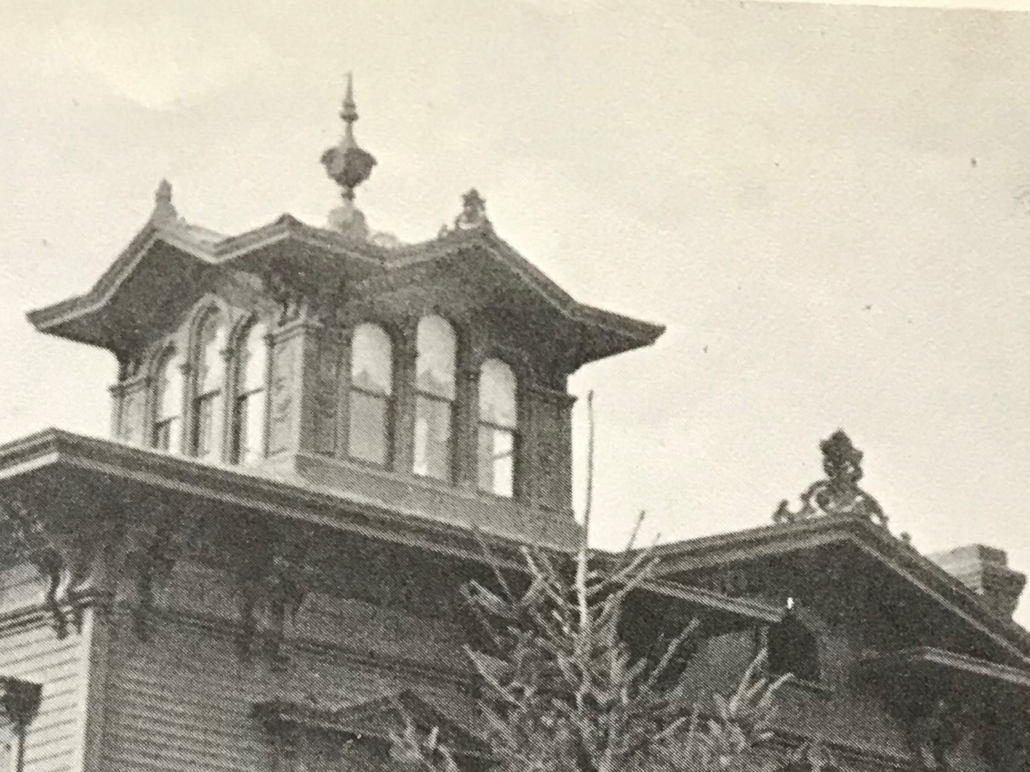 The 1870s Jones House is a classic example of a two-story plain shape Italianate-style, wood-frame structure with basement and attic-levels.  Located on the center of the roof is a four-sided, square cupola or “belvedere” containing three arched windows on each side.